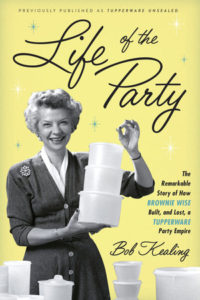 I picked up Life of the Party: The Remarkable Story of How Brownie Wise Built, and Lost, a Tupperware Party Empire by Bob Kealing, because I absolutely love Tupperware and I wanted to learn more about its history.  I had never heard of Brownie Wise and the title alone really piqued my interest.  Little did I know, I was in for quite a story!

Brownie Wise immediately reminded me of my grandmother because they both had an ‘all or nothing’ mentality and did what it took to provide for their families.  They both could sell anything to anyone too!  I now consider Wise to be the true “Queen of Tupperware.’  Did she take things too far as a woman in a ‘man’s world?’  No doubt about it.  This woman was ahead of her time and really paved the way for women in business.  She taught housewives and mothers that they could make spending money or they could make a career if they chose.  The only problem is that she never got the recognition she deserved.

The book kept my attention from beginning to end and the  chapters were short.  It runs a little slow towards the middle but it was a great book to pick up and read in different sittings.  Not only did I learn a lot more about Tupperware’s history, I learned much about the time period and Florida before Disney World!  I don’t want to ruin any of this book, even though one can pretty much guess how it ends.  It would spark interesting conversation for a book club.  Kealing did a wonderful job giving Wise the credit she earned!  Enjoy!

Disclosure:  I received this book in exchange for my review and membership in the Blogging For Books program.  All comments and/or opinions are my own.  No other compensation was received.

Looking for something specific?