Awhile back, I posted on my Facebook page that I had gotten a phenomenal deal at Victoria’s Secret.  It was so good that I can’t resist sharing it with everyone.  It even surprised me!   I am not usually one to shop in Victoria’s Secret since I think it’s fairly expensive.  I am a cheapskate, remember?  Also, there really isn’t one close to our house.

I had received an email from them about their new sports bras and a promotion where if you tried one on, you got a card that had a mystery discount.  Again, the closest one to us is an hour away and trying on sports bras with two young kids did not sound like my idea of fun.  Discount or no.  Upon further inspection of the email, I saw that they created a really cute hash tag on their twitter called #SportbraBreakup.  They encouraged women to break up with their old sports bra.  I used the hash tag and wrote ‘You are supposed to lift me up and you only pull me down.’  Something along those lines. I thought it was cute and fun! Well, anyway, I got a DM from Victoria’s Secret that I received a coupon.  I opened it and I had won a free sports bra!

I really needed a new one so I decided to make a trip to the mall to cash in my prize asap.  My friend went with me and watched the kids while I tried a few things on.  Let me tell you, this is the best sports bra that I have ever owned.  Say goodbye to uni-boob because this beauty lifts, separates and supports!  The Semi-Annual Sale was going on too so I figured it would be an excellent time to use my gift card that I won at Christmas.  Victoria’s Secret has a wonderful social media presence.  I love it because they give tons of stuff away.  I won this $25 gift card at Christmas on twitter for being on their #VSNiceList.

I picked out a sports bra (any new one that I wanted, I was told.)  But I had to get it shipped to me since they were out of my size.  They shipped it to my house for FREE!  I also picked out another bra from the sale and a cute pair of pajamas. 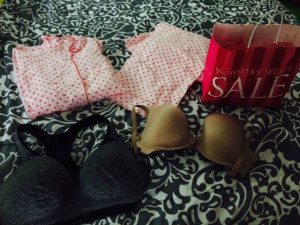 Here’s how I did it.

I signed up for a Victoria’s Credit Card, which I have paid off since and got $15 off my order that day.

I suggest you check out Victoria’s Secret the next time the Semi-Annual Sale rolls around.  You never know what you’ll find.  Plus, be sure to follow them on social media.  Again, you never know what pops up.  What was the best deal you’ve ever gotten?

Disclaimer: This post is in no way affiliated with Victoria’s Secret.  I just wanted to brag a little about my great deal.  Enjoy!

Looking for something specific?